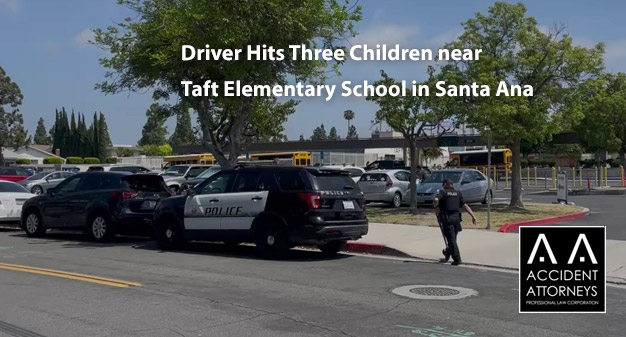 SANTA ANA, CA (May 24, 2022) – Early in the morning on Monday in Santa Ana, a driver struck and injured three children near Taft Elementary School. The May 23 crash occurred on the sidewalk.

The time was roughly 8:30 a.m., according to Maria Lopez. Lopez is a sergeant with Santa Ana Police.

Reports say not long before the crash, the suspect had been escorted off the elementary school grounds after trespassing.

Afterwards, the suspect drove onto the sidewalk near the school, and struck three children, reports say.

Responders transported the three young patients to the hospital. Their condition was described as stable. Their families have not been identified in reports.

Authorities discovered what they called incendiary devices in the vehicle the suspect was driving, and a bomb squad came on scene.

According to Sergeant Lopez, the suspect was found with a stab wound they believe was self inflicted.

Investigators are collecting information to understand why the suspect crashed into the students and walked onto campus before the crash. The suspect’s identity has not been reported.

If you or a loved one has been injured in an auto collision, Accident Lawyer strongly encourages you to call our Santa Ana car accident lawyers. Your experienced Car Accident Lawyer Santa Ana will provide you with the best legal representation and guidance that you need. Our offices are conveniently located throughout California and we conduct regular travels in the region to meet with clients. Contact Car Accident Lawyer today.