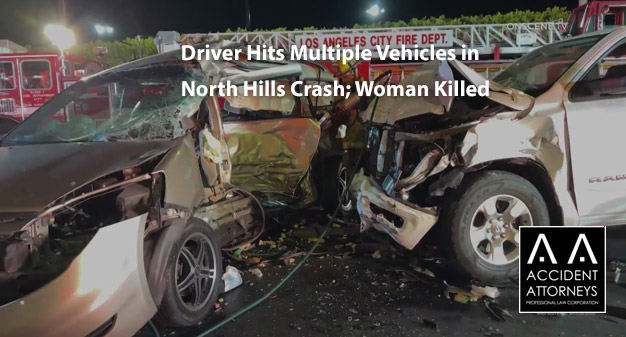 NORTH HILLS, CA (May 13, 2022) – Early in the morning on Thursday in North Hills, a driver struck multiple vehicles, including a fire truck. A woman was killed in the May 12 crash, which occurred on Roscoe Boulevard.

The time was a little after midnight, Los Angeles Police said.

A vehicle–which has not been described–was traveling on Roscoe Boulevard and going eastbound. The driver is alleged to have gone through a light that was red, and collided with a another vehicle.

The vehicle that was struck has not been described.

The suspect drove away, according to police, and struck a second vehicle. A woman who was traveling in the second vehicle–which has also not been described–was killed in the crash.

Responders arrived and pronounced the woman deceased at the crash site. She was identified only as 76 years old.

Her name and city of residence have not been reported.

Reports do not say how many people were involved in the crash. No other injuries have been reported, and no one has been identified.

Investigators are continuing to work on the incident.

If you or a loved one has been injured in an auto collision, Accident Lawyer strongly encourages you to call our North Hills car accident lawyers. Your experienced Car Accident Lawyer North Hills will provide you with the best legal representation and guidance that you need. Our offices are conveniently located throughout California and we conduct regular travels in the region to meet with clients. Contact Car Accident Lawyer today.