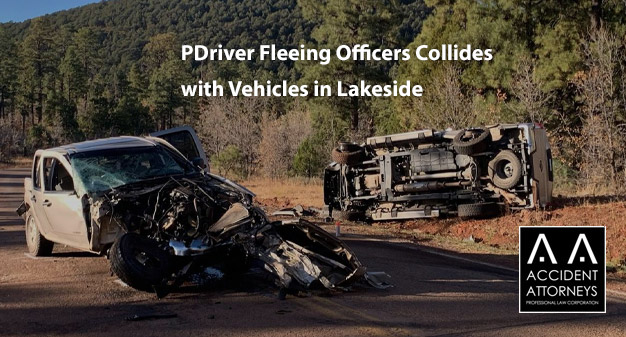 LAKESIDE, CA (November 24, 2021) – A driver in a suspected stolen vehicle collided with other vehicles in Lakeside late at night on Monday. The crash occurred on Los Coches Road off of I-8.

The time was roughly 10:00 p.m., the California Highway Patrol said.

Officers tried to make a traffic stop on a vehicle–described as a Volkswagen–but the driver fled. The suspect driver in the Volkswagen traveled the wrong way on I-8 while fleeing from officers, reports say.

Two other vehicles–which have not been described–were affected in the crash.

Authorities took the person who had been driving the Volkswagen into custody, as well as a passenger. The driver’s identity–including his name, age, and city of residence–has not been reported.

The identity of the passenger has also not been reported.

Reports do not identify the drivers of the two other vehicles involved in the crash. Investigators are continuing their work on the incident.

If you or a loved one has been injured in an auto collision, the AA Accident Attorneys strongly encourage you to call our Lakeside car accident lawyers. Your experienced Car Accident Lawyer Lakeside will provide you with the best legal representation and guidance that you need. Our offices are conveniently located throughout California and we conduct regular travels in the region to meet with clients. Contact Car Accident Lawyer today.