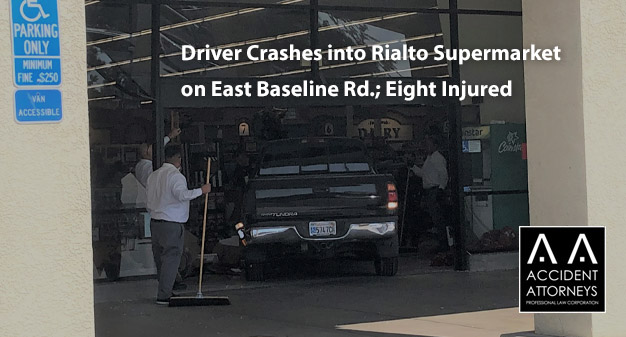 RIALTO, CA (October 11, 2022) – On Monday morning in Rialto, a driver crashed into a supermarket, injuring eight people. The October 10 crash occurred on East Baseline Road in the 100 block, at the Stater Brothers market.

The time was roughly 9:45 a.m., according to Nic Parcher. Parcher is a corporal with Rialto Police.

Police said the driver was attempting to parking a pickup truck–described as a Toyota Tundra–in a spot for handicapped drivers. According to Parcher, the driver mistakenly stepped on the gas pedal instead of the brake pedal.

The pickup truck crashed into the store and traveled roughly 30 feet into it.

A number of cash registers were struck.

Responders found eight people were injured in the crash: two had bones that were broken, and five others were injured, but their injuries have not been described.

Responders transported seven people who had been in the store, and the driver, to a hospital.

The driver was identified only as 74 years old. Her name and city of residence have not been reported.

Reports do not yet identity any of the victims by name, and their current conditions are not known.

Investigators are continuing their examination of the crash details and information.

Hire an Accident Attorney in Rialto

If you or a loved one has been injured in an auto collision, Accident Lawyer strongly encourages you to call our Rialto car accident lawyers. Your experienced Car Accident Lawyer Rialto will provide you with the best legal representation and guidance that you need. Our offices are conveniently located throughout California and we conduct regular travels in the region to meet with clients. Contact Car Accident Lawyer today.