Crash on Highway 166 near New Cuyama Kills One 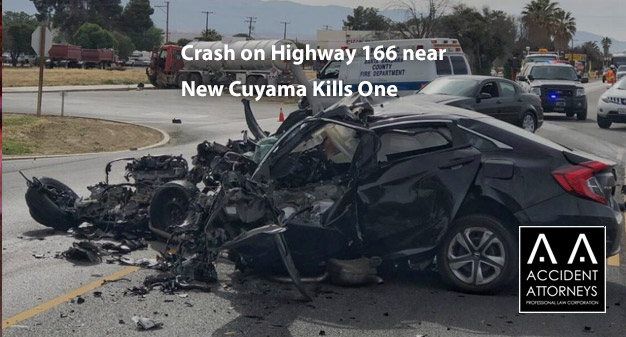 Crash on Highway 166 near New Cuyama Kills One

NEW CUYAMA, CA (December 3, 2021) – On Monday near New Cuyama, a crash on Highway 166 killed a person. The November 29 crash occurred near Wasioja Road and to the west of it.

The time was roughly 1:30 p.m., the California Highway Patrol said.

Responders arrived and found a vehicle–described as a Honda CRV, blue in color–lying upside down in a field near the highway. The driver of the vehicle was killed in the crash.

According to authorities, the Honda had been traveling on the eastbound side of the roadway prior to the crash.

According to authorities, the blue Honda CRV was one of the vehicles that was observed before the crash.

Another vehicle that was observed was a sedan with four doors, dark in color, with stripes in orange and black on the side of the car and the trunk.

If anyone has information about the crash, or the dark sedan, the person can call the California Highway Patrol in Santa Maria. The number is 805-349-8728.

If you or a loved one has been injured in an auto collision, the AA Accident Attorneys strongly encourage you to call our New Cuyama car accident lawyers. Your experienced Car Accident Lawyer New Cuyama will provide you with the best legal representation and guidance that you need. Our offices are conveniently located throughout California and we conduct regular travels in the region to meet with clients. Contact Car Accident Lawyer today.