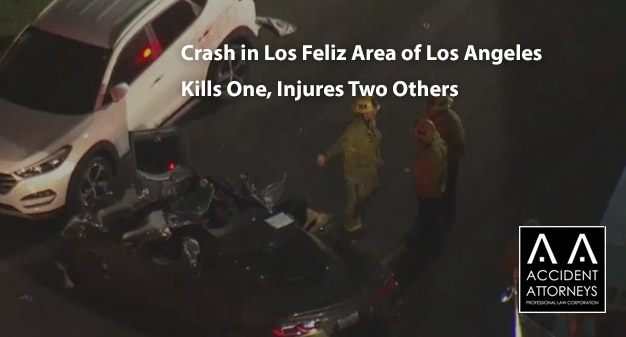 Crash in Los Feliz Area of Los Angeles Kills One, Injures Two Others

LOS ANGELES, CA (August 23, 2021) – Early in the evening on Sunday, a crash in the Los Feliz neighborhood of Los Angeles killed one person and injured two others. The August 22 crash occurred on North Vermont Avenue in the 1800 block, close to Franklin Avenue.

The time was roughly 8:11 p.m., Margaret Stewart said. Stewart is a spokesperson with the Los Angeles Fire Department.

A vehicle–described as a Corvette–had been heading northbound on Vermont Avenue. The Corvette struck a number of cars that were parked, Los Angeles Police said.

Responders arrived and found one person in the Corvette who had been a passenger died at the crash site. He was identified only as 20 years old. His name and city of residence have not been reported.

Responders transported a woman who had also been traveling in the Corvette as a passenger to the hospital. She suffered serious injuries, reports say, and her condition is critical.

She was identified only as 18 years old. Her name and city of residence have not been reported.

Responders treated the driver at the scene of the crash, and then he was released, reports say. He was identified only as in his early twenties. His name and city of residence have not been reported.

Investigators are working to understand why the crash happened. They are in the process of collecting information.