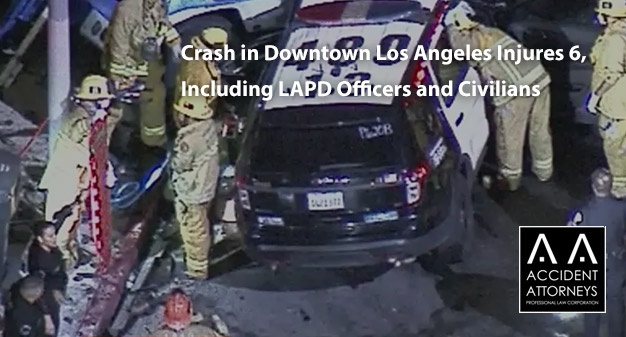 No details have been reported on how the crash occurred or how many vehicles were involved. Reports say only that a patrol vehicle was damaged and airbags had deployed.

The patrol vehicle was sitting in the middle of a crosswalk, reports say.

Responders from the Los Angeles Fire Department transported the two police officers to the hospital. The types of injuries they suffered, and their current condition, are not known.

They have not been identified in reports.

According to the Los Angeles Fire Department, four bystanders were injured in the crash. The manner in which they were injured has not been described.

One bystander suffered injuries that were described as serious. The person’s current condition is not known. The victim has not been identified.

Three other people were injured, with their injuries being described as minor. They have also not been identified.

It is not known if the civilians had been pedestrians or in vehicles.