City of Industry Crash on Mangate Ave. Kills One, Injures Others 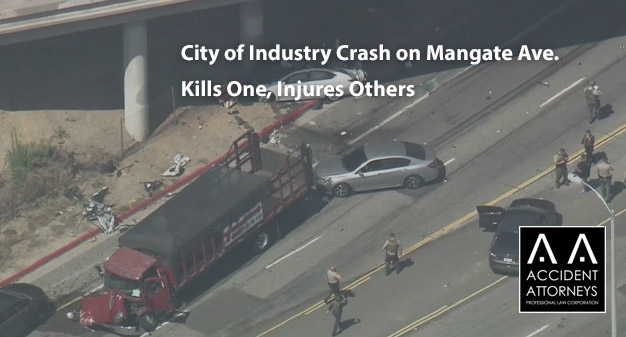 City of Industry Crash on Mangate Ave. Kills One, Injures Others

CITY OF INDUSTRY, CA (September 1, 2022) – Late in the afternoon on Sunday in the City of Industry, two vehicles collided, killing one person and injuring four other people. The September 4 crash occurred on Mangate Avenue at Temple Avenue.

No details have been reported on how the crash happened.

A Good Samaritan–identified as Michael George–helped two occupants out of one of the vehicles that crashed and subsequently began to burn. Both vehicles completely burned in the crash, reports say.

Responders from the Los Angeles County Fire Department arrived on scene to help, and found one person had died in the crash.

The identity of the person–including name, age, gender, and city of residence–has not been reported.

Responders took four patients to the hospital. None of the patients have been identified, and their injuries and conditions have not been described.

Investigators are continuing to collect details and information about the crash to understand its causes.

Hire an Accident Attorney in City of Industry