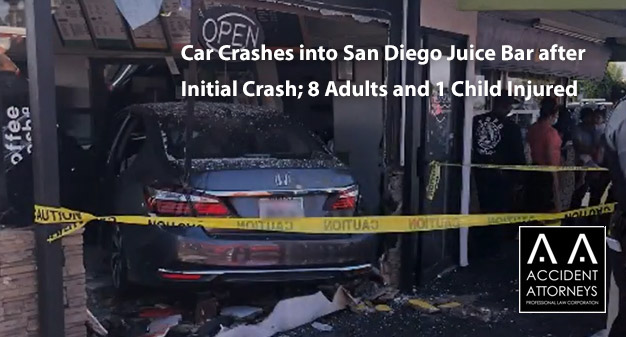 SAN DIEGO, CA (November 3, 2021) – Around midday on Tuesday in San Diego, eight adults and one child were injured when a car crashed into a juice bar after an initial crash with another vehicle. The November 2 crash occurred on Logan Avenue in the 4700 block close to 47th Street, in the area of Lincoln Park.

Police said that two vehicles–which had been traveling on Logan Avenue–collided, and the force of the crash propelled one of the vehicles into the juice bar. The manner in which the initial crash occurred has not been described.

A number of people who were inside of the juice bar business were injured when the car entered.

None of the victims have been identified in reports. According to reports, six of the victims suffered injuries that were described as major. Their current condition is not known.

The person who had been driving the car that smashed into the juice bar has not been identified.

According to police, one of the vehicles involved in the crash–described as a Mustang–left the scene. The Mustang’s driver was arrested by officers, reports say. The person’s identity has not been reported.