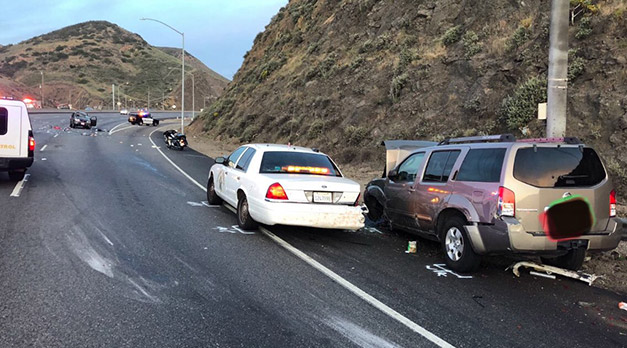 Camarillo, CA May 11, 2018 – An 18-year old Camarillo resident is behind bars after he went on a destructive hit-and-run rampage along the Hollywood 101 Freeway following an argument with his parents that resulted in the injury of 3 people including a California Highway Patrol officer, who was helping a stranded motorist Thursday evening, May 10th. The string of destruction began around 6:50 p.m. when 18-year old Carlos Lozano reportedly had an argument with his mother. Lozano then took the keys to his mother’s Nissan Pathfinder and driving off out of their apartment complex in the 700 block of Paseo Camarillo where Lozano struck 2 vehicles that were parked along the street. While Lozano’s parents were exchanging insurance information, he reportedly came back to the complex and tried to run over his mother and father, who luckily managed to dive out of the way. Lozano ended up hitting another parked vehicle and crashed into a support pillar in the carport causing severe damage. He then left the area and got onto the 101 freeway, where he intentionally struck 1 vehicle near Carmen Drive and another near Pleasant Valley Road. Lozano continued driving until he neared the top of the Conejo Grade where he used the SUV to collide with a California Highway Patrol car that was parked behind a stranded vehicle on the right shoulder near the weigh station rendering aid to the motorist striking both vehicles.

The officer was transported by ambulance to Los Robles Hospital & Medical Center in Thousand Oaks where he was treated for minor injuries and later released. 2 other people suffered minor injuries, they too were taken to a nearby hospital where they were treated for minor injuries and are expected to survive. Lozano was arrested and booked at the Pre-Trial Detention Facility in Ventura after being treated at a local hospital for minor injuries. Lozano faces charges of at least 6 counts of felony assault with a deadly weapon, as CHP believes the collisions were intentional. All but one of the 101 freeway’s southbound lanes were closed as authorities investigated causing backup traffic for miles. The freeway was cleared of debris and reopened by 11:00 p.m.