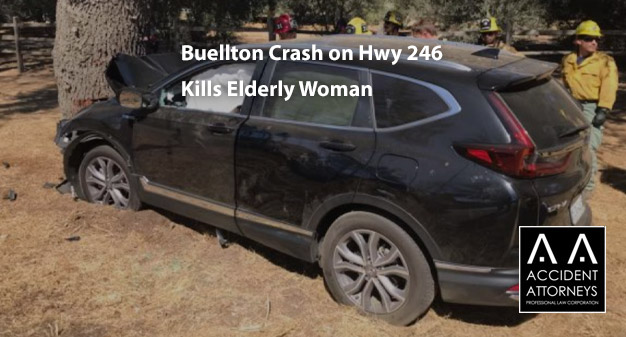 BUELLTON, CA (October 6, 2022) – Early in the afternoon on Wednesday near Buellton, two vehicles collided, killing an elderly woman. The October 5 crash occurred on Highway 246, in the Buellton Flats area.

The time was roughly a little after 1:00 p.m., the California Highway Patrol said.

According to authorities, a car–which has not been described–had been stopped beside the highway.

The driver of the car tried to execute a U-turn, authorities allege, and a Honda CRV–which was passing by–clipped the car.

The impact of the crash sent the Honda to smash into a tree, reports say.

A Good Samaritan was reported to have helped the person who had been driving the CRV by giving her CPR until responders from Santa Barbara County Fire arrived on scene.

Responders transported the patient to a hospital in the area.

Responders also transported a passenger from the CRV to the hospital. The person suffered injuries that were described as moderate.

Reports say one of the patients–who had been taken to Marian Regional Medical Center in Santa Maria–died in the hospital.

She was identified only as a resident of San Juan Bautista, 73 years old.

The person who was driving the car suffered injuries that were described as minor.

No one involved in the crash has been identified by name.

Investigators are at work to understand the crash, and if anyone has information about the incident, the person can call the California Highway Patrol’s Buellton office.

Hire an Accident Attorney in Buellton

If you or a loved one has been injured in an auto collision, Accident Lawyer strongly encourages you to call our Buellton car accident lawyers. Your experienced Car Accident Lawyer Buellton will provide you with the best legal representation and guidance that you need. Our offices are conveniently located throughout California and we conduct regular travels in the region to meet with clients. Contact Car Accident Lawyer today.