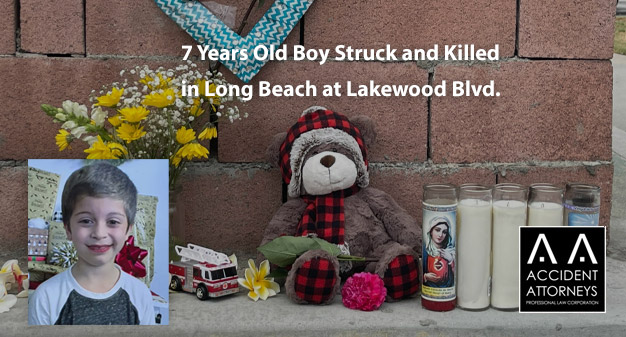 LONG BEACH, CA (July 28, 2022) – Late in the afternoon on Tuesday in Long Beach, a driver struck and killed a seven-year-old boy. The July 26 crash occurred close to where 23rd Street and Lakewood Boulevard intersect.

According to police, the boy was walking with his father within a crosswalk across Lakewood Boulevard.

A vehicle–described as a Doge Ram pickup truck–was traveling on 23rd Street and going west. The vehicle made a turn to the left to Lakewood Boulevard.

The driver is alleged to have struck the boy after failing to stop for the pedestrian right-of-way signal that was illuminated.

Responders from the Long Beach Fire Department arrived to help, but the boy died at the crash site. His name has not been reported.

Reports also do not say if his father was hurt; the father’s identity is also not known from reports.

The person who was driving the truck stayed at the crash site and cooperated with the investigation.

Authorities arrested him on suspicion of felony vehicular manslaughter with gross negligence.

He was identified as James Barnes, a resident of Desert Hot Springs, 57 years old.

If you or a loved one has been injured in an auto collision, Accident Lawyer strongly encourages you to call our Long Beach car accident lawyers. Your experienced Car Accident Lawyer Long Beach will provide you with the best legal representation and guidance that you need. Our offices are conveniently located throughout California and we conduct regular travels in the region to meet with clients. Contact Car Accident Lawyer today.