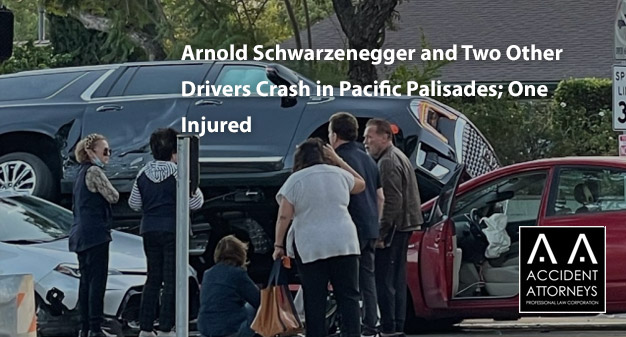 PACIFIC PALISADES, CA (January 25, 2022) – Late in the afternoon on Friday in Pacific Palisades, Arnold Schwarzenegger and two other drivers were involved in a crash that resulted in injuries. The January 21 crash occurred where Allenford Avenue and Sunset Boulevard intersect, close to Paul Revere Charter Middle School.

The time was roughly a little before 4:35 p.m., according to Margaret Stewart. Stewart is with the Los Angeles Fire Department.

Reports say Schwarzenegger was driving a GMC Yukon SUV. The two other vehicles involved in the crash were described as a Toyota Prius and a Porsche Cayenne.

The way in which the crash happened has not been described. Reports say the SUV Schwarzenegger was driving ended up on top of the Prius.

Responders transported one person to the hospital. The patient suffered injuries that were described as minor.

Her identity, including name, age, gender, and city of residence, has not been reported.

Reports say Schwarzenegger, who is an actor and was a governor of California, was not hurt in the crash.

The third driver has not been identified in reports. According to reports, no one else was hurt in the collision.

Investigators are in the process of working to understand the crash.