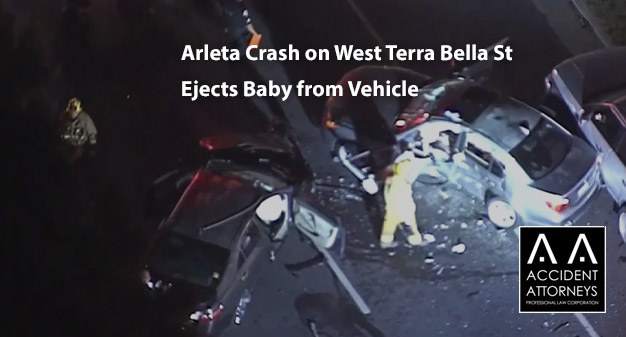 ARLETA, CA (September 19, 2022) – On Sunday night in Arleta, a crash critically injured two people, including a baby who was ejected from a vehicle. The September 18 crash occurred on West Terra Bella Street in the 13900 block.

The time was roughly 8:50 p.m., according to Rich Brunson. Brunson is a sergeant with Los Angeles Police.

According to reports, two vehicles–described as a Toyota Camry and a BMW sedan–had been traveling on Terra Bella westbound.

Authorities allege the BMW’s driver tried to make a U-turn, and the Toyota Camry struck it broadside.

The force of the crash threw a baby from a vehicle. The baby suffered injuries that were described as critical.

Responders worked to free a driver who was trapped in the wreckage of the BMW.

They transported the person to the hospital. The patient suffered injuries that were also described as critical.

The patient has not been identified in reports.

The Camry’s driver remained at the crash site and cooperated with the investigation. The person’s identity has not been reported.

One other person was involved in the crash, but it is not clear what vehicle the person had been traveling in. The condition of the person is not known, nor has the identity been reported.

Investigators found a car seat in the vehicle, and they are working to understand why the baby was ejected.

They are also gathering information and details to understand the crash.

Hire an Accident Attorney in Arleta

If you or a loved one has been injured in an auto collision, Accident Lawyer strongly encourages you to call our Arleta car accident lawyers. Your experienced Car Accident Lawyer Arleta will provide you with the best legal representation and guidance that you need. Our offices are conveniently located throughout California and we conduct regular travels in the region to meet with clients. Contact Car Accident Lawyer today.