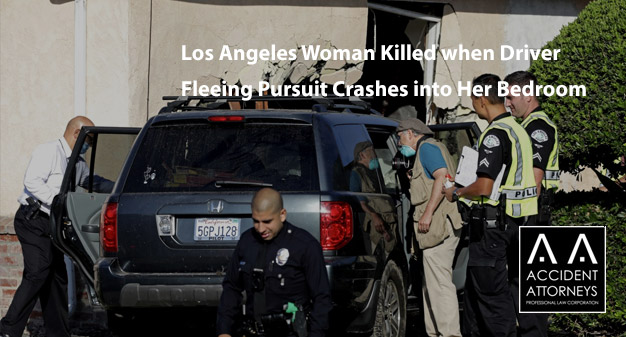 LOS ANGELES, CA (June 28, 2021) – Aida Villavicencio was killed on Saturday when a driver who was fleeing police pursuit crashed into her bedroom. The June 26 crash occurred in the Crenshaw neighborhood, in the vicinity of of 39th Street and Buckingham Road.

The incident began when a vehicle–described as an SUV–struck the rear-end of a Los Angeles Police patrol vehicle in the area of Martin Luther King Boulevard and Hobart Boulevard. Reports say the officers who had been in the patrol vehicle exited, and attempted to walk up to the SUV that crashed into their vehicle.

A couple who had been in the bedroom were trapped beneath the suspect’s vehicle. Responders pronounced one person deceased at the crash site. She was identified as Aida Villavicencio, 86 years old.

Responders transported her husband to a hospital in the area. He suffered trauma to his head, and his condition is critical. He is 90 years old.

Authorities arrested the suspect driver on suspicion of gross vehicular manslaughter. He was identified as Eliseo Ixchopcalel, 26 years old.