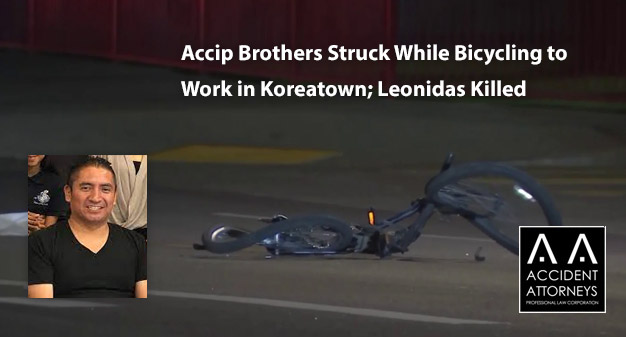 LOS ANGELES, CA (April 27, 2022) – Early in the morning on Tuesday in Los Angeles, a hit-and-run driver struck two brothers who were bicycling to work. One of the brothers–later identified as Leonidas Accip–was killed.

The April 26 crash occurred on Olympic Boulevard in the area of Koreatown.

The time was roughly a little after 3:20 a.m., authorities said.

According to reports, a vehicle–described as a Jeep Cherokee–had been parked on Olympic Boulevard. As the driver was driving away from the curb, a person jumped on the vehicle’s hood.

Reports say the person who jumped on the hood had been a victim of grand theft auto in an incident that was not related to the driver, though the person believed the driver was involved.

The person who had been on the vehicle’s hood eventually fell off, reports say, and the Jeep continued away.

The Jeep Cherokee struck the two brothers who were bicycling to their jobs. The driver did not stop to help the victims, or remain at the crash site.

Responders arrived to help, but one of the brothers–identified as Leonidas–died. He was 38 years old.

The other brother was injured, but stable, reports say.

Investigators are searching for the suspect hit-and-run run, who has not been described.

If anyone has information about the crash, the person can call authorities.