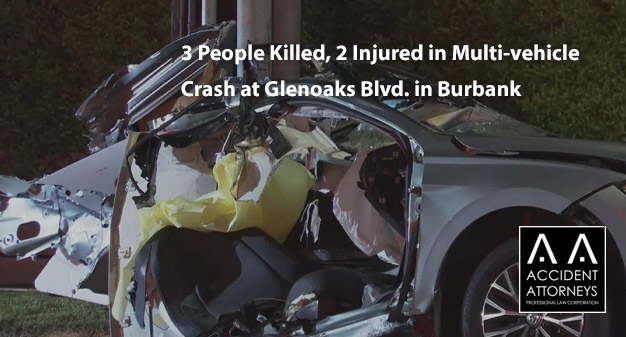 BURBANK, CA (August 4, 2021) – A multi-vehicle crash late at night on Tuesday in Burbank, in which street racing may have been involved, killed three people and injured two others. The August 3 crash occurred at Glenoaks Boulevard and Andover Drive.

According to police, three cars crashed into cars that were parked. One vehicle–described as a Volkswagen–had smashed into a utility pole and erupted in flames.

Three people who had been inside the Volkswagen died at the crash site. Responders transported a fourth occupant of the car to the hospital. None of the occupants of the Volkswagen have been identified.

A vehicle–described as a Kia–also crashed. The Kia was found by officers farther down the road.

Responders transported the person who had been driving the Kia to the hospital. The current condition of the person is not known. The driver has not been identified.

Another car–described as a Mercedes–also crashed. It is not known if the driver and a passenger were injured in the crash. The two people have not been identified.

According to Emil Brimway, who is a sergeant with Burbank Police, speed played a role in the crash. Investigators are working to determine if street racing was a factor.

If you or a loved one has been injured in an auto collision, the AA Accident Attorney strongly encourages you to call our Burbank car accident lawyers. Your experienced Car Accident Lawyer Burbank will provide you with the best legal representation and guidance that you need. Our offices are conveniently located throughout California and we conduct regular travels in the region to meet with clients. Contact Car Accident Lawyer today.