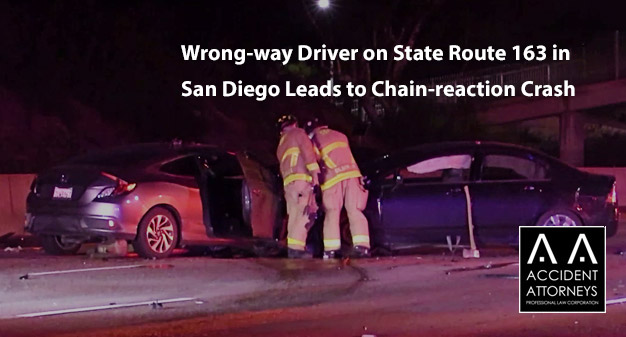 SAN DIEGO, CA (February 1, 2022) – Early in the morning on Saturday in San Diego, a wrong-way driver on State Route 163 smashed head on into a vehicle. The January 29 crash lead to a chain-reaction pileup.

According to reports, a detective with San Diego Police first spotted a vehicle–described as a sedan, dark in color–traveling the wrong way on Interstate 15. The car was going southbound on the northbound side of the roadway.

The wrong-way driver traveled through Mira Mesa and Miramar, and went onto State Route 163, reports say. In the area of Linda Vista, close to Friars Road, the car crashed head on with another vehicle, which has not been described.

A third vehicle–which has also not been described–was affected and involved in the crash.

None of the people involved in the crash have been identified. Reports say minor injuries occurred, but it is not known who was injured.

Investigators are working to gather information about the crash.