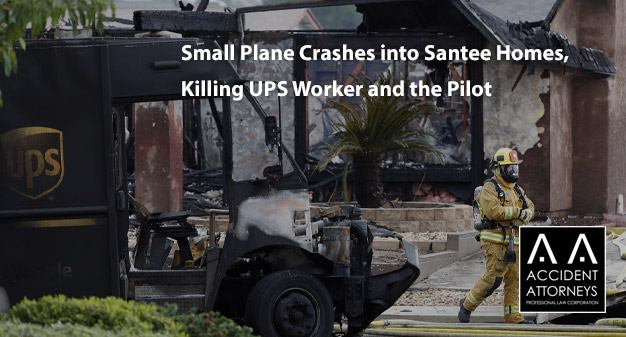 SANTEE, CA (October 1, 2021) – Early in the afternoon on Monday in Santee, a small plane crashed into houses, killing two people including a UPS employee and Dr. Sugata Gas. The October 11 crash occurred at Greencastle Street and Jeremy Street.

The time was roughly 12:14 p.m., according to authorities.

The plane–described as a twin-engine C340 Cessna–had left Yuma, Arizona and was heading to Montgomery Field in San Diego, according to Donna Durckel. Durckel is a spokesperson for San Diego County.

For reasons that are not yet known, the plane crashed into houses in Santee, and part of the sequence was recorded on video captured by a surveillance camera, reports say.

The crash caused significant fire damage at two houses, according to reports. Two people were killed.

One person was confirmed to have been an employee making a delivery for UPS. His identity–including name, age, and city of residence–has not been reported.

The pilot died in the crash. He was identified by colleagues as Dr. Sugata Gas, a cardiologist from Yuma who owned the plane.

Good Samaritans in the neighborhood helped pull other victims from the scene. Responders transported the patients to a hospital. The identities of the injured people have not been reported.

The National Transportation Safety Board and Federal Aviation Administration are investigating the cause of the crash.

Hire an Accident Attorney in Santee

If you or a loved one has been injured in an accident, AA Accident Attorney strongly encourages you to call our Santee accident lawyers. Your experienced Accident Lawyer Santee will provide you with the best legal representation and guidance that you need. Our offices are conveniently located throughout California and we conduct regular travels in the region to meet with clients. Contact Accident Lawyer today.