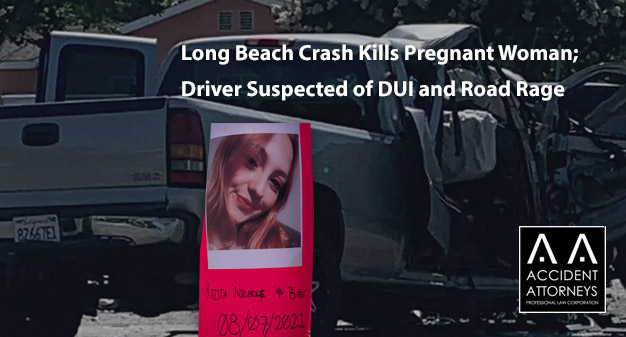 LONG BEACH, CA (August 9, 2021) – A pregnant woman died in a multi-vehicle crash in Long Beach on Saturday morning involving a driver who is suspected of DUI and road rage. The August 7 crash occurred where 52nd Street and Long Beach Boulevard intersect.

According to police, a vehicle–described as a GMC pickup truck–head been traveling on Long Beach Boulevard and heading south at a fast speed. Police allege that the driver of the GMC pickup–later identified as Miguel Larios, 26 years old–engaged in an incident of road rage with another vehicle that last over several blocks.

The person driving the other vehicle tried to get away from the road rage situation, police allege. A vehicle–described as a Toyota Corolla–pulled into traffic from the curb, reports say, and the GMC and the Toyota collided.

The GMC went out of Larios’ control, and the GMC hit a pickup truck that was parked on the street, according to police.

Responders arrived and transported Larios and two passengers traveling with him to the hospital. One of the passengers, identified as a woman who was eight months pregnant, died from her injuries.

She was a resident of Long Beach, 23 years old. Her name has not been reported. Her unborn baby also died.

The other passenger–identified only as a boy, 10 years old–suffered injuries that were described as not life threatening.

Reports do not say if anyone in the Toyota was injured in the collision.

Larios was arrested on suspicion of driving under the influence, child endangerment, and gross vehicular manslaughter while intoxicated.

If anyone has information about the crash, the person can contact Detective Joseph Johnson or Detective Kelsey Myers. The number is 562-570-7355.