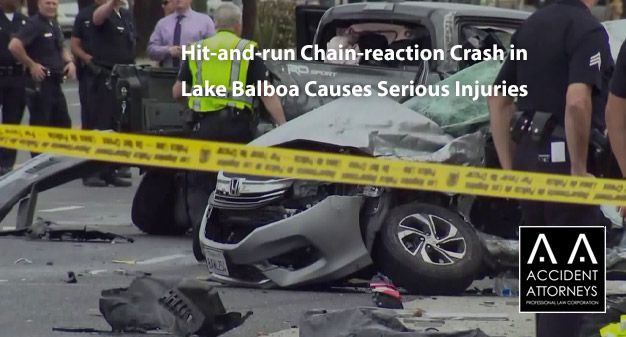 LOS ANGELES, CA (December 15, 2021) – Late at night on Monday in Lake Balboa, a chain-reaction crash caused serious injuries. One of the drivers fled the scene on foot after the December 12 crash, and authorities are looking for the suspect.

The crash occurred close to where Sherman Way and Balboa Boulevard intersect.

The Honda had been traveling on Balboa Boulevard and heading southbound.

Two other vehicles were struck, according to the Los Angeles Police Department, after the initial crash. The other two vehicles, which have not been described, had been stopped in the area of the intersection.

Reports say the driver of the SUV fled the scene on foot. She has not been described.

Responders took two occupants of the Honda CRV to the hospital. The two patients suffered serious injuries, reports say. The identities of the two people have not been reported.

The drivers of the two other vehicles have also not been reported, and it is not known if anyone else was hurt in the crash.

Investigators are searching for the suspect hit-and-run driver. If anyone has information about the incident, the person can call Detective Davis. The number is 818-644-8035.

If you or a loved one has been injured in an auto collision, the AA Accident Attorneys strongly encourage you to call our Lake Balboa car accident lawyers. Your experienced Car Accident Lawyer Lake Balboa will provide you with the best legal representation and guidance that you need. Our offices are conveniently located throughout California and we conduct regular travels in the region to meet with clients. Contact Car Accident Lawyer today.