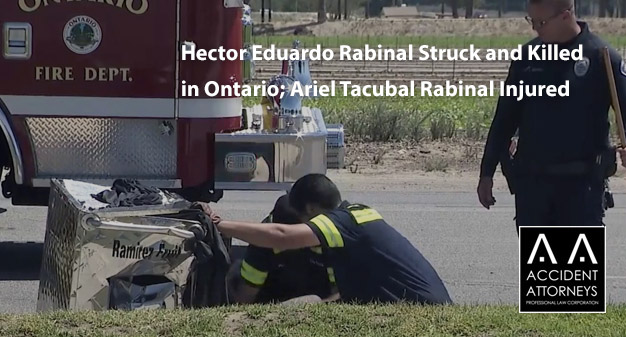 ONTARIO, CA (July 7, 2021) – Hector Eduardo Rabinal was identified by his brother as the fruit vendor who was struck and killed on Monday in Ontario. Another fruit vendor was also struck, and suffered injuries in the July 5 crash, which occurred on Riverside Drive. The injured man was also identified by the same family member as Ariel Tacubal Rabinal.

The time was roughly 11:15 a.m., according to Ontario Police.

Two people who were selling fruit had been crossing Riverside Drive near Euclid Avenue with a cart. A driver struck the two pedestrians.

One of the fruit vendors who died was identified by his brother as Hector Eduardo Rabinal.

Responders transported the other victim to a hospital in the area. The patient’s condition was described as critical, Emily Hernandez said. Hernandez is a corporal with the police department.

The surviving victim was identified by the same family member, who said the two victims were cousins.

Responders transported the driver to the hospital. She suffered injuries that were described as minor.

Authorities arrested the driver on suspicion of felony DUI and gross vehicular manslaughter. She was identified as Jessica Dewet, a resident of Chino, 43 years old.

Investigators are continuing to work on the details of the crash.

If you or a loved one has been injured in an auto collision, the AA Accident Attorney strongly encourages you to call our Ontario car accident lawyers. Your experienced Car Accident Lawyer Ontario will provide you with the best legal representation and guidance that you need. Our offices are conveniently located throughout California and we conduct regular travels in the region to meet with clients. Contact Car Accident Lawyer today.