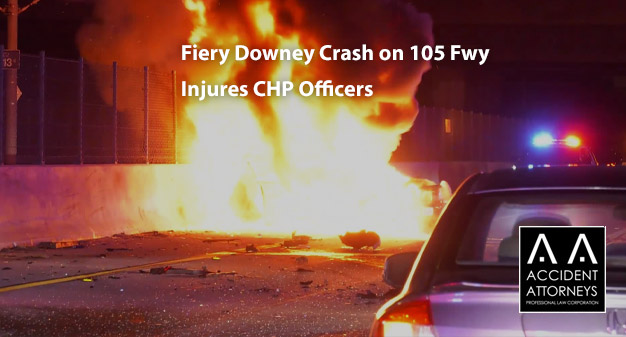 DOWNEY, CA (April 28, 2022) – Early in the morning on Thursday in Downey, California Highway Patrol officers were struck by vehicle, which resulted in a fiery crash and injuries. The April 27 crash occurred on the eastbound side of the freeway, on the offramp for Lakewood Boulevard.

The time was roughly 1:30 a.m., Patrick Kimball said. Kimball is an officer with the California Highway Patrol.

According to Kimball, officers responded to the scene of a crash on the offramp. While officers were at the site, a vehicle–described as an SUV–which had been traveling on the freeway, struck the patrol vehicle.

One of the officers was outside of the patrol vehicle when the crash happened; the vehicle erupted in flames.

Responders transported an officer to St. Francis Medical Center, located in Lynwood, for treatment. The types of injuries the officer suffered, and current condition, are not known.

The officer has not been identified.

Reports do not say if others were hurt in the crash.

The person who had been driving the SUV has also not been identified.

No details have been reported about the first crash that officers responded to before they were struck.

Investigators are working on the details of both crashes.

Hire an Accident Attorney in Downey

If you or a loved one has been injured in an auto collision, Accident Lawyer strongly encourages you to call our Downey car accident lawyers. Your experienced Car Accident Lawyer Downey will provide you with the best legal representation and guidance that you need. Our offices are conveniently located throughout California and we conduct regular travels in the region to meet with clients. Contact Car Accident Lawyer today.