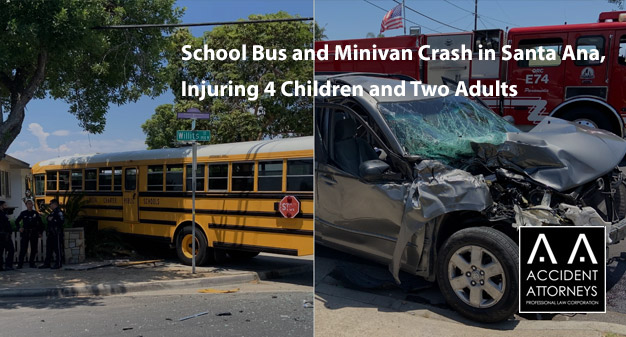 SANTA ANA, CA (June 29, 2021) – A Santa Ana crash involving a school bus and a minivan early in the afternoon on Monday injured six people, including four children and two adults. The June 28 crash occurred on South Daisy Avenue in the 500 block.

No details have yet been reported on how the charter school bus and the minivan collided. The line of travel of each vehicle prior to colliding has not been described.

Responders arrived and transported two children and one adult to the hospital. The types of injuries the patients suffered, and their current condition, are not known.

Responders treated two other children and one other adult at the crash site. Their injuries have also not been reported.

None of the people involved in the crash have been identified, including names, ages, genders, and cities of residence. The driver of each vehicle has not been identified in reports.

Investigators are working to understand how the crash happened, why it happened, and what circumstances contributed.

If you or a loved one has been injured in an auto collision, the AA Accident Attorney strongly encourages you to call our Santa Ana car accident lawyers. Your experienced Car Accident Lawyer Santa Ana will provide you with the best legal representation and guidance that you need. Our offices are conveniently located throughout California and we conduct regular travels in the region to meet with clients. Contact Car Accident Lawyer today.