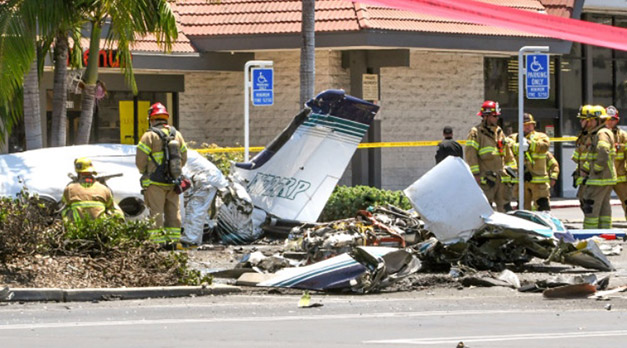 Santa Ana, CA (August 4, 2018) – The Orange County Coroner’s Office has released the identities of the 5 people who were killed after their small plane crashed in a Staples parking lot in Santa Ana Sunday afternoon, August 5th. The victims were identified as32-ywar old Navid Hakimi, of Los Angeles and his mother 62-year old Floria Hakimi, of Danville, CA. 53-year old Scott Shepherd, and his wife 42-year old Lara Shepherd, both of Diablo, CA and lastly 29-year old Nasim Ghanadan, of Alamo, CA. There were no other passengers on the plane. According to authorities, the aircraft, a Cessna 414, left the Buchanan Field Airport in Concord, a city in northern California close to San Francisco, around 10:23 a.m. and was en route to John Wayne Airport in Santa Ana where the aircraft was scheduled to arrive around 12:30 p.m. The aircraft unfortunately went down around 12:28 p.m. just 2 miles from John Wayne Airport crashing into a Staples parking lot in the 3900 block of Bristol Street across from South Coast Plaza.

According to a Federal Aviation Administration spokesperson, Scott Shepard was the pilot of the twin-engine Cessna and declared an emergency but did not state the nature of the problem. The aircraft was seen on 2 dashboard camera nose-diving into the parking lot where it hit a parked vehicle. The aircraft did not erupt in flames and no one on the ground was injured. “I was working and I hear a loud thud,” said Christian Tornero, who worked at a store near Staples. “I thought it was like a semi-truck that just tipped over or something.”

“There was just nothing left and you could smell the gas,” Kathy Hayden said. According to Orange County Fire Authority, a group of firefighters were having lunch at a restaurant across the street from where the plane had gone down. They quickly jumped into their fire truck and rushed to the scene after one of them heard screaming. “And somebody — one of the patrons — yelled, and they looked up and saw the plane coming down towards the parking lot,” spokesman Steve Concialdi said. All 5 passengers were pronounced dead at the scene by the O.C. Fire Authority. The National Transit and Safety Board were on scene Monday morning where they were preparing to transport the wreckage to a facility where they could investigate the cause of the accident.

Find A Santa Ana Personal Injury Lawyer Near You