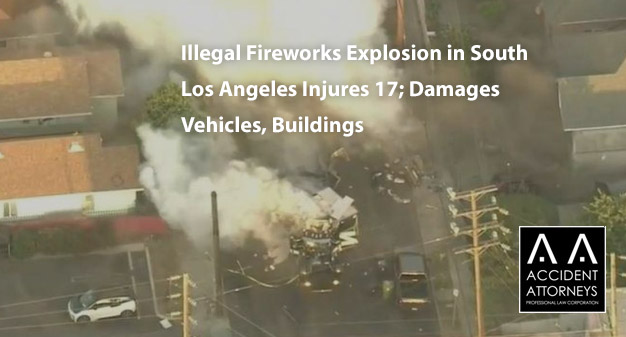 LOS ANGELES, CA (July 1, 2021) – On Wednesday night in South Los Angeles, 17 people were injured, and buildings and vehicles were damaged in an explosion of illegal fireworks. The June 30 incident occurred on East 27th Street in the 700 block.

Authorities were in the process of removing illegal fireworks from a residence when the fireworks exploded inside a containment vehicle. The vehicle–described as a semi-truck outfitted with an iron chamber–catastrophically failed during the blast.

According to Raul Jovel, who is a lieutenant with the Los Angeles Police Department, authorities decided to detonate a number of improvised devices that were considered too volatile to move to another location. Reports say not more than ten pounds of the explosive material had been placed into the iron chamber, which was below its safety rating. According to Jovel, the explosion was not expected.

The explosion injured seventeen people in the area, destroyed vehicles, and damaged houses and a laundromat in the vicinity.

Ten of the injured people were identified as officers with the Los Angeles Police Department. They have not been identified.

One injured person is an agent with the Bureau of Alcohol, Tobacco, Firearms, and Explosives. The person has not been identified.

A man, 60 years old; a woman, 85 years old; and a woman, 51 years old suffered injuries that were described as moderate, the Los Angeles Fire Department said.

The other victims suffered injuries that were described as minor. They have also not been identified.

Authorities evacuated a number of residents from the area.

A tip led authorities to the house and the illegal fireworks cache. They found roughly 5,000 pounds of illegal fireworks, including commercially made fireworks, which had been stored in boxes that were stacked as high as eight to ten feet around the property.

Authorities arrested a resident who was in the home. He was identified as Arturo Cejas, 27 years old. The charges he faces include possession of destructive devices. According to Police Chief Michael Moore, Cejas may also face a charge of child endangerment. Cejas’ brother–ten years old–was also in the house.

The semi-truck with the iron chamber was destroyed in the explosion, which also destroyed vehicles nearby on the street.

Investigators are working to collect information about the incident.

If you or a loved one has been injured in an auto collision, iAccident Lawyer strongly encourages you to call our Los Angeles accident lawyers. Your experienced Accident Lawyer Los Angeles will provide you with the best legal representation and guidance that you need. Our offices are conveniently located throughout California and we conduct regular travels in the region to meet with clients. Contact Accident Lawyer today.