Anaheim Crash Kills Two Men near Shooting Outside of Restaurant 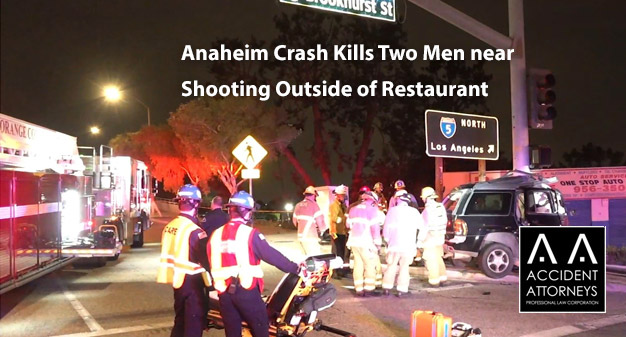 Anaheim Crash Kills Two Men near Shooting Outside of Restaurant

ANAHEIM, CA (February 22, 2022) – Early in the morning on Monday in Anaheim, a crash killed two men after a shooting took place outside of a restaurant. The February 21 crash occurred where La Palma Avenue and Brookhurst intersect.

The time was shortly after midnight, Anaheim Police said.

According to authorities, gunshots were fired outdoors near the El Cangrejo Nice restaurant. Police officers responded to the incident, reports say, and a vehicle–described only as an SUV–was observed leaving the area at a fast speed.

Officers followed the SUV, which was observed to have gone through a number of lights that were red before it smashed into a light pole, reports say. The crash site, at the Brookhurst intersection, is roughly a mile from the restaurant where the shooting occurred.

Responders found that two people who were occupants of the SUV died at the crash site. Their identities have not been reported.

Officers located the person who is alleged to have fired the gunshots outside the restaurant. He was not one of the men who were traveling in the SUV. The person has not been identified.

Reports say that at this time, investigators do not know if the two men who were killed in the crash were connected to the shooting incident.

Hire an Accident Attorney in Anaheim

If you or a loved one has been injured in an auto collision, Accident Lawyer strongly encourages you to call our Anaheim car accident lawyers. Your experienced Car Accident Lawyer Anaheim will provide you with the best legal representation and guidance that you need. Our offices are conveniently located throughout California and we conduct regular travels in the region to meet with clients. Contact Car Accident Lawyer today.