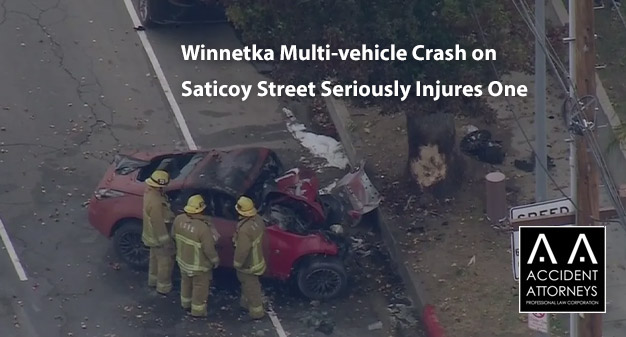 Authorities say four vehicles collided, but the manner in which the crash occurred, and the sequence involving each vehicle, has not been described.

The vehicles have also not been described.

Responders transported one person to the hospital. The person suffered injuries described as serious.

The identity of the patient has not been reported.

Reports also say that according to Los Angeles Police, a pregnant woman was one of the people involved in the crash. Her identity has not been reported, and her condition is not known.

None of the people involved in the crash have been identified in reports. Reports do not say if anyone else was hurt.

Investigators are working to understand the crash, and they are currently gathering information.

Hire an Accident Attorney in Winnetka

If you or a loved one has been injured in an auto collision, the AA Accident Attorneys strongly encourage you to call our Winnetka car accident lawyers. Your experienced Car Accident Lawyer Winnetka will provide you with the best legal representation and guidance that you need. Our offices are conveniently located throughout California and we conduct regular travels in the region to meet with clients. Contact Car Accident Lawyer today.