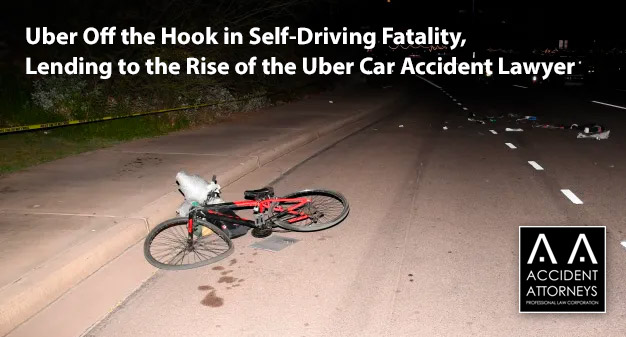 For many, the need for an Uber car accident lawyer may be on the horizon. Car-share juggernaut Uber has been cleared of criminal wrongdoing in the death of an Arizona woman. On the night of March 18, 2018, 49-year-old Elaine Herzberg was struck and killed by a self-driving vehicle prototype as she walked her bicycle across the street. It was the first fatality of its kind.

How It All Went Wrong

Investigators confirmed that various circumstances contributed to the accident, including the fact that Herzberg was jaywalking and her clothes were dark. However, police released a report stating the accident was “entirely avoidable”. Not only did an interior camera show that the vehicle’s human operator was watching The Voice on Hulu at the time of the accident, but also investigators found that the car’s emergency brake was disabled. While the vehicle system detected an object in its vicinity, it failed to brake and notify its operator of Herzberg.

Within two weeks, Uber settled with Herzberg’s family at an undisclosed amount. In addition, Arizona’s Governor suspended Uber’s ability to test self-driving cars in the State. While this may have been seen setback in Uber’s mission, the company is continuing its path. The automated vehicle “revolution” is moving full speed ahead as is the demand an Uber car accident lawyer who can sufficiently represent victims.

The Successes and Failures of the Self-Driving Car Movement

There is no denying that Uber has changed the landscape of public transportation; the decrease in fatalities related to drunk driving is palpable. Furthermore, the advent of self-driving technology came with high expectations, according to the U.S. Department of Transportation:

However, as is seen with the unfortunate situation in Arizona, the self-driving vehicle is not perfect. Plus, glitches and errors are not isolated to a few situations here and there. In fact, it was reported that an Uber manager revealed that accidents were numerous and some car operators were improperly trained.

Moreover, because of the unfamiliarity of developing technology, the legal system doesn’t generally appear to be set in stone as to how victims of self-driving car injuries should be indemnified. But, this doesn’t mean an Uber car accident attorney lacks the proper tools to represent the injured.

So, how does a victim reconcile being injured in a self-driving vehicle accident with a legal grey area? Simply put, it requires a legal firm with extensive experience in the car accident realm, as well as an understanding of rideshare issues.

As seasoned attorneys with over 40 years of combined experience, AA Accident Attorneys has represented a seemingly countless number of clients. We’ve collected more than $150,000,000 and we have a 98 percent success rate. Our attorneys have handled a plethora of cases involving car and pedestrian accidents.

Undoubtedly, as self-driving technology becomes more prevalent, unexpected situations will arise, and victims will need help navigating the legal process. If you ever find yourself in self-driving car or rideshare incident, contact an Uber car accident lawyer at AA Accident Attorneys as soon as possible!