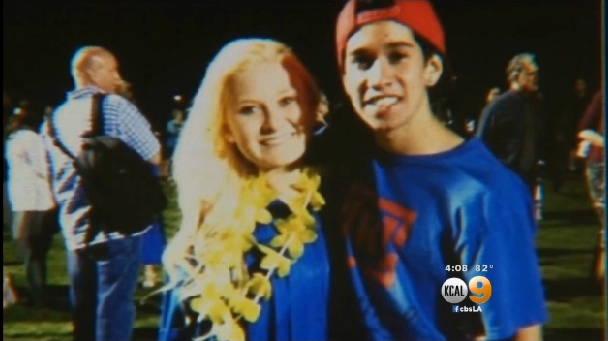 The truck was traveling down the I-15 off-ramp when it struck a PT Cruiser on Highway 138, said investigators.

“It appears that the dump truck rolled the PT Cruiser and then landed on top of it,” said Joy Sepulveda of Caltrans in an interview with CBS Los Angeles.

The five teenagers had all either graduated or attended Serrano High School.

Nicole Lyle, 18, and John Cabrera, 16, were both pronounced dead at the scene.

“This was the last place he was; the last place he’s known to be on Earth. He was a good boy. Loved to ride motorcycles. Little bit of a daredevil, I have to say,” Rene Myer, Cabrera’s grandmother, said to CBS Los Angeles. “As a baby, when he used to like chips, he’d call them ‘chippies.’ Just little things like that. He was just a really good kid.”

The three other teenagers, took Michael Baker, 20, David Castaneda, and Shayne Gretzner, 19 were taken to the hospital for treatment

The cause of the crash is still under investigation.