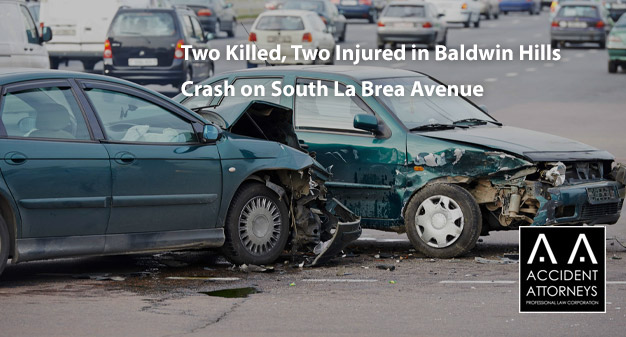 BALDWIN HILLS, CA (August 11, 2021) – Early in the evening on Tuesday in Baldwin Hills, a crash killed two people and injured two others. The August 10 crash occurred at 3761 S. La Brea Avenue, in an area between Coliseum Street and Obama Boulevard.

The time was roughly 7:05 p.m., Nicholas Prange said. Prange is with the Los Angeles Fire Department.

Two vehicles collided, but the manner in which the crash happened has not been reported. Neither of the vehicles has been described.

Responders arrived and found two people had died at the crash site. The identities of the people, including their names, ages, gender, and cities of residence, have not been reported.

Responders transported two patients to the hospital. Their condition was described as fair.

The patients were identified only as women. Their names, ages, and cities of residence have not been reported.

Investigators are working to understand how the crash happened. They are in the process of collecting information.

If you or a loved one has been injured in an auto collision, the AA Accident Attorney strongly encourages you to call our Baldwin Hills car accident lawyers. Your experienced Car Accident Lawyer Baldwin Hills will provide you with the best legal representation and guidance that you need. Our offices are conveniently located throughout California and we conduct regular travels in the region to meet with clients. Contact Car Accident Lawyer today.