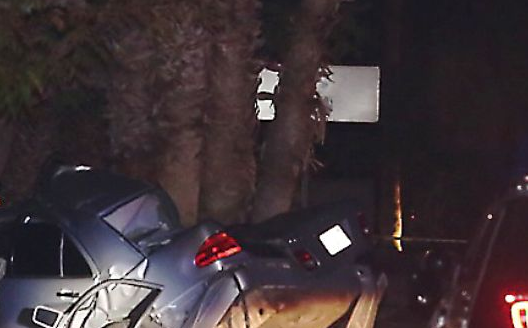 A 21-year-old man from Winnetka and his 38-year-old passenger from Los Angeles were both pronounced dead at the scene after their 1999 Mercedes-Benz crossed over the middle of the road and crashed into a palm tree.

The car was heading east on Racquet Club Drive when the crash happened about 10:30 p.m. on Saturday. The names of the two dead have not been released.

The crash happened just hours after hundreds were at the First Baptist Church in Palm Springs to mourn the loss of 18-year-old Tierra LeeAnn Reagins, one of two pronounced dead at the scene of another crash that occurred on August 31.

Funeral services for the other death in the August 31 crash are still pending. Osvaldo Ramirez, 21, of Cathedral City had two young children and another on the way.

In the crash that took the lives of Ramirez and Reagins, their Cadillac slammed into a traffic police at Gene Autry Trail and Tachevah Driver, splitting the car in half. The crash happened about 3:10 a.m.

Jonathan Garcia-Avila, also 21 and from Cathedral City, was driving the Cadillac and was severely injured. Another passenger in the car received only minor injuries. Garcia-Avila has been charged with two counts of murder and one count of DUI gross vehicular manslaughter.