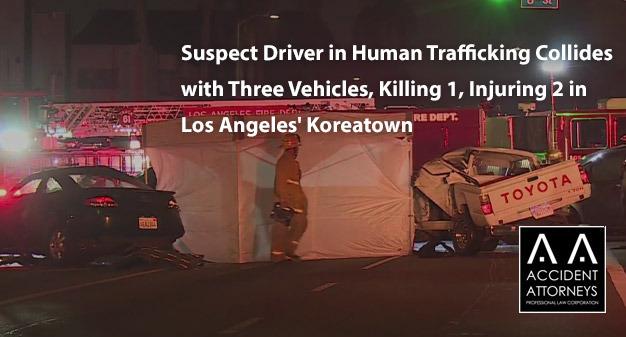 LOS ANGELES, CA (September 3, 2021) – A suspect who was fleeing police pursuit related to an investigation of human trafficking crashed into three vehicles in Los Angeles, killing a driver and injuring two others. The September 2 crash happened at South Wilton Place and West 6th Street, in the Koreatown area.

Officers began to pursue a vehicle–described as a Mercedes Benz–in the area of Beverly Boulevard and North Gramercy Place. The two occupants of the car were suspects in connection with an investigation of human trafficking.

While fleeing, the driver of the Mercedes collided with three other vehicles. A man who had been traveling in one of the vehicles–described as a pickup truck–died at the crash site.

Responders transported two people to the hospital. The patients had been traveling in the two other vehicles that were involved in the crash.

The types of injuries the people suffered, and their current condition, are not known. They have not been identified in reports.

The two suspects were also transported to a hospital for treatment. No details have been reported on the human trafficking investigation. The two suspects have not been identified in reports.