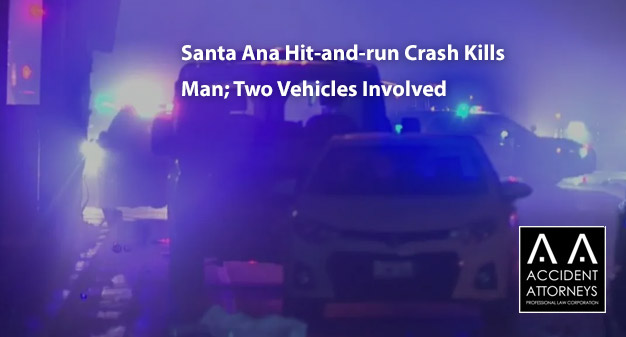 SANTA ANA, CA (November 5, 2021) – Early in the morning on Friday in Santa Ana, a man was killed in a hit-and-run crash. Police believe that two vehicles were involved in the November 5 crash, which occurred on Fairview Street close to where McFadden Avenue is located.

Responders arrived to help, but the victim died at the crash site. He was identified only as Hispanic, and in his forties. His name, age, and city of residence have not been reported.

At least two vehicles hit the man, authorities believe, due to debris they found that belongs to a Hyundai and a Mercedes Benz. Neither of the drivers stayed at the crash scene.

A person driving a third vehicle–which has not been described–remained at the incident site and tried to help, reports say. The driver has not been identified.

Investigators are searching for the two vehicles involved in the crash that left the scene, as well as the suspect hit-and-run drivers.

If you or a loved one has been injured in an auto collision, the AA Accident Attorney strongly encourages you to call our Santa Ana car accident lawyers. Your experienced Car Accident Lawyer Santa Ana will provide you with the best legal representation and guidance that you need. Our offices are conveniently located throughout California and we conduct regular travels in the region to meet with clients. Contact Car Accident Lawyer today.