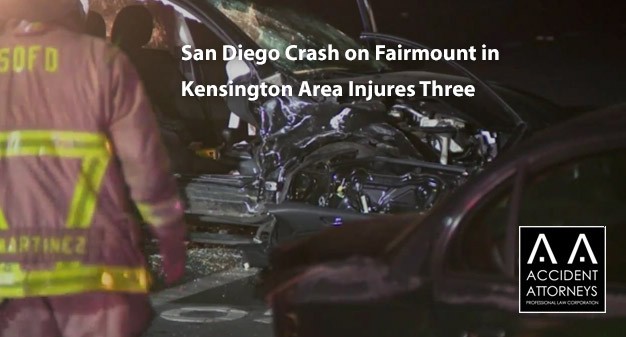 SAN DIEGO, CA (April 7, 2022) – Late at night on Wednesday in San Diego, a multi-vehicle crash in the Kensington area injured three people. The April 6 crash occurred on Fairmount in the 4800 block.

The time was roughly a little after 10:00 p.m., according to John Buttle. Buttle is an officer with San Diego Police.

A driver in a northbound vehicle attempted to merge into a lane on Fairmount, and collided with the back corner of a vehicle ahead of him, according to Buttle.

The vehicle that was struck went out of the driver’s control, reports say,  and went over the median and into the lanes of opposing traffic. The vehicle was struck by an oncoming vehicle in the southbound lane.

After the initial crash, the vehicle that rear-ended the second vehicle struck a construction truck that was parked on the street.

Responders found that the person who was driving the second vehicle suffered injuries that were described as serious, including a lacerated kidney and liver, and broken pelvis.

Responders transported the patient to the hospital. The person was identified only as 32 years old. The name, gender, and city of residence of the patient has not been reported.

The driver of the southbound, third vehicle, was identified as a woman, 57 years old. Her name and city of residence have not been reported. A passenger who had been traveling with her suffered injuries that included a broken sternum, reports say.

He was identified only as a man, 65 years old. His name and city of residence have also not been reported.

The driver of the first vehicle was identified as a man, 31 years old.  His name and city of residence are not known from reports. The injuries he suffered have not been described.