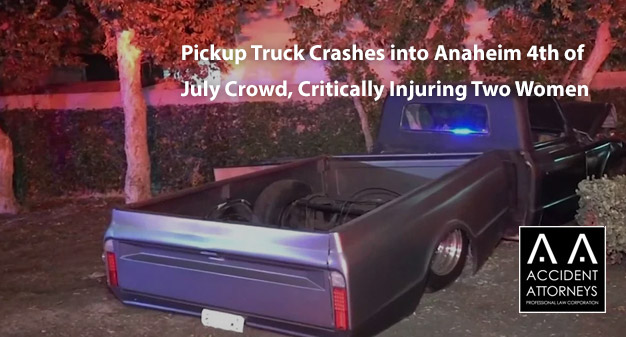 ANAHEIM, CA (July 6, 2021) – On the 4th of July, two women who were watching fireworks in Anaheim suffered critical injuries when they hit by a pickup truck that crashed through a crowd of people. The crash occurred on North Grand Avenue in the 200 block.

The time was roughly 9:40 p.m., according to Jacob Gallacher. Gallacher is a sergeant with Anaheim Police.

According to a call made to police, reports say, the driver of the pickup truck had been driving tight circles in the street, also known as “doing doughnuts.” The pickup went onto the curb and traveled in the area where a crowd of people were located.

Reports say the caller’s narrative of the events has not been substantiated as yet, according to authorities.

Responders transported two victims to a hospital in the area. Both suffered injuries that were described as major. Their condition was described as critical.

The identity of the pickup truck driver, including name, age, gender, and city of residence, has not been reported.

Investigators are working on the crash.

If you or a loved one has been injured in an auto collision, the AA Accident Attorneys strongly encourage you to call our Anaheim car accident lawyers. Your experienced Car Accident Lawyer Anaheim will provide you with the best legal representation and guidance that you need. Our offices are conveniently located throughout California and we conduct regular travels in the region to meet with clients. Contact Car Accident Lawyer today.