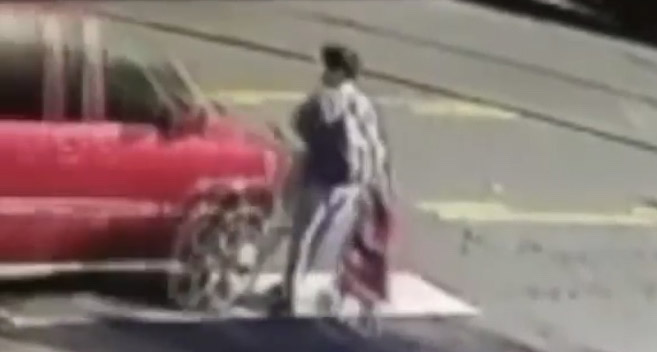 East Hollywood, CA – The Los Angeles Police Department is seeking the public’s help in finding the driver of a hit-and-run vehicle that left a 50-year old pedestrian severely injured in East Hollywood, Tuesday morning February 11th. The incident occurred sometime after 9:00 A.M. when the victim, 950-year old Tatiana Leytman, was crossing the street inside a marked crosswalk on Fountain Avenue and Lyman place in East Hollywood headed to the grocery store when she was struck by a red minivan. The driver of that minivan did not stop to render aid and instead fled the scene. Several other pedestrians who had witnessed the crash came to Leytman’s aid until first responders arrived. Laytman was transported to a nearby hospital where she was treated for a broken rib and a broken leg. She was treated at the hospital and then released into the care of her husband. Leytman is now at home recovering. Tatiana’s husband, Vladimir Leytman, says he was disgusted that the driver did not stop adding, “this is unacceptable. I still don’t believe (it, and) I saw the video.” The minivan was described as being a 2005 to 2010 Chevrolet Uplander with damage to its front right side. No further details about the crash have been released. A $25,000 reward is being offered for information in the case. The driver could face felony hit-and-run charges. Anyone who has information can call Detective Moses Castillo at 213-833-3713.

Find A Hollywood Car Accident Lawyer Near You