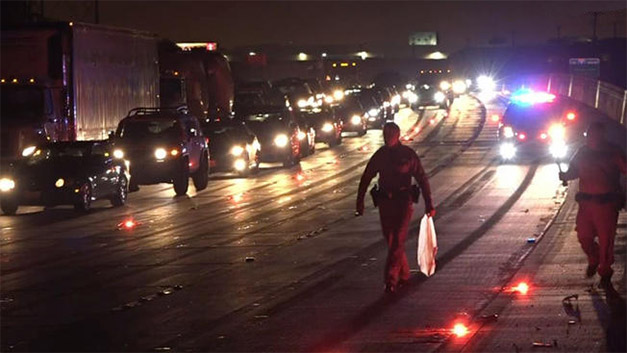 The Los Angeles County Coroner’s office has released the identity of a homeless man that was struck and killed while he tried to cross the Long Beach (710) Freeway in Bell Monday morning, April 23rd. According to California Highway Patrol the incident was reported around 3:00 a.m. when multiple witnesses said that the victim, 26-year old Ivan Vergara, had been struck by a 2015 Toyota Highlander on the southbound 710 freeway just south of Slauson Avenue as Vergara was running across the lanes of traffic. First responders arrived to find Vergara dead at the scene. Caltrans issued a SigAlert shutting down all lanes of traffic on the southbound side of the 710 freeway while the Los Angeles Coroner was summoned and Vergara’s body was taken away by 3:40 a.m. All lanes were reopened by 4:37 a.m. once investigators and detectives collected their evidence. The driver of the Toyota Highlander was described as a 47-year old man but no other information is available at this time. The CHP asked anyone with any information regarding the death to call them at (323) 980-4600.