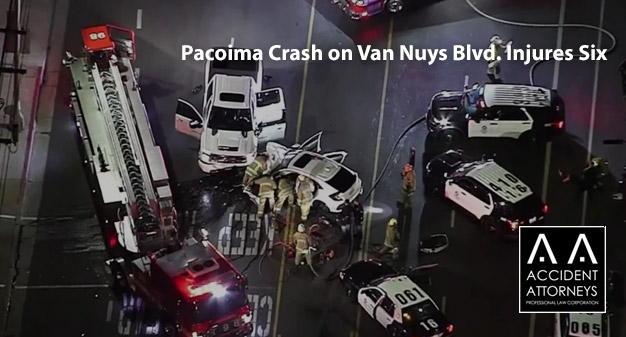 The time was roughly 10:20 p.m., Margaret Stewart said. Stewart is with the Los Angeles Fire Department.

No details have been reported on how the crash happened, nor have the vehicles been described.

Responders arrived, and worked to free one person who was trapped in the wreckage.

Responders transported two patients to the hospital. Their condition was described as critical. The identities of the patients have not been reported.

Three patients suffered injuries that were described as minor. According to reports, one person left the crash site and was not treated by responders.

None of the names and cities of residence of the people involved in the crash have been reported.

Investigators are working on the incident.

Hire an Accident Attorney in Pacoima

If you or a loved one has been injured in an auto collision, Accident Lawyer strongly encourages you to call our Pacoima car accident lawyers. Your experienced Car Accident Lawyer Pacoima will provide you with the best legal representation and guidance that you need. Our offices are conveniently located throughout California and we conduct regular travels in the region to meet with clients. Contact Car Accident Lawyer today.