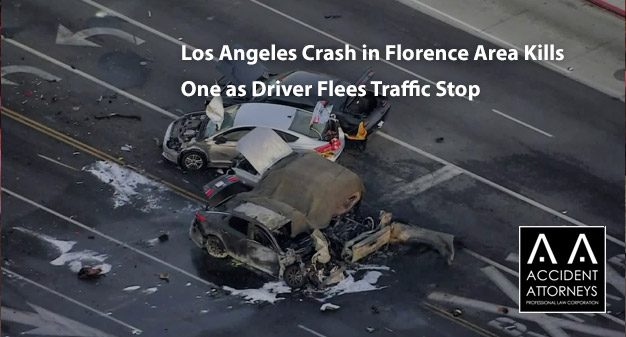 LOS ANGELES, CA (August 19, 2022) – Early in the morning on Friday in Los Angeles, a driver who was fleeing a traffic stop crashed into multiple vehicles, killing one person.

The August 19 crash occurred in the neighborhood of Florence, where South Broadway and West Manchester Boulevard intersect.

No details have been reported on where the suspect driver first began to flee the traffic stop, nor has the suspect’s vehicle been described.

At the West Manchester Boulevard intersection, the suspect driver’s vehicle was reported to have collided with as many as three other vehicles, one of which was described as a big rig.

The other two vehicles have not been described.

Responders pronounced one person deceased at the crash site. The identity of the person has not been reported.

Reports do not say which vehicle the deceased person was traveling in.

Responders found another person was injured in the crash, but the types of injuries suffered, and current condition, are not known.

The number of people involved in the crash has not been reported, and no one has been identified.