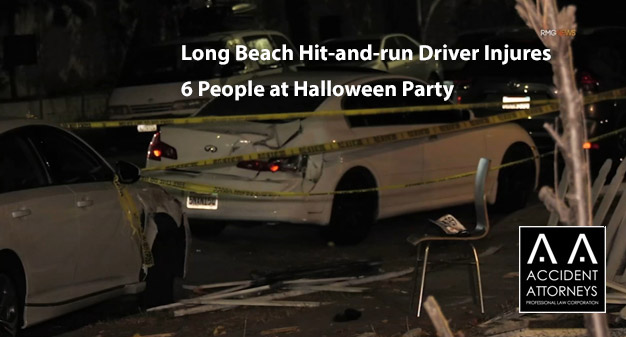 LONG BEACH, CA (November 1, 2021) – Early in the morning on Sunday in Long Beach, a hit-and-run driver went through a crowd of people standing in yard, striking and injuring six. The October 31 crash occurred where Orange Avenue and Werner Street intersect.

People had been gathered for a Halloween party, reports say, and had been standing outside of a residence. According to reports, a woman–identified as Myra Preciado–said it had been a party her son had thrown.

Authorities said the hit-and-run driver–who was in a blue car–struck and injured people. According to people who witnessed the crash, the driver is alleged to have gone onto the sidewalk, struck a fence, and a number of people.

Witnesses said the suspect continued down the sidewalk, and struck two cars that were parked, a fence at another house, and other people.

Responders from the Long Beach Fire Department transported six patients to the hospital.

Authorities arrested a man on Sunday night on suspicion of attempted murder, assault with a deadly weapon, and felony domestic violence. He was identified as Richard Dalton Irigoyen, a resident of Long Beach, 27 years old.

Investigators are continuing to collect information about the incident.