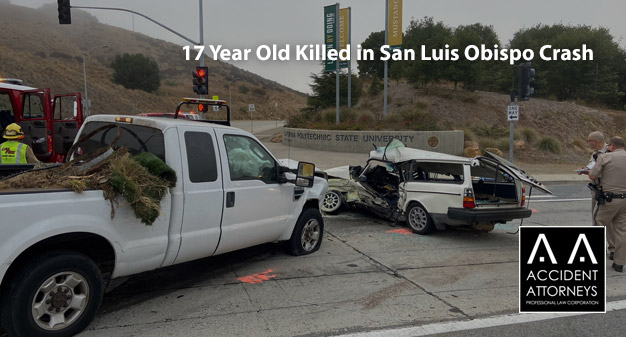 CARLSBAD, CA (September 14, 2021) – Finnegan Lee Hartford Osbaldeston was identified by the California Highway Patrol as the teen driver killed in a crash in San Luis Obispo early in the morning on Saturday. The September 11 crash occurred close to Cal Poly, where Highland Drive and Highway 1 intersect.

The time was roughly 6:45 a.m., according to the California Highway Patrol.

Reports say Osbaldeston had been traveling on Highland Drive and was making a left turn onto Highway 1. A vehicle–described as a pickup truck–collided with Osbaldeston’s vehicle, hitting it broadside.

Reports say that according to investigators, the pickup truck went through a light that was red.

The force of the crash sent Osbaldeston’s vehicle into a third vehicle–which has not been described–that was stopped for the traffic light.

Osbaldeston was killed in the crash. He was a resident of San Luis Obispo, 17 years old.

The person who had been driving the third vehicle suffered injuries that were described as minor. She was identified only as a resident of Cambria, 50 years old. Her name has not been reported.

Responders transported the person who had been driving the pickup truck to a hospital. He suffered injuries that were described as moderate.

He was identified as Bryan Griffiths, a resident of Morro Bay, 79 years old.

Investigators are continuing their work on the crash. If anyone has information about the incident, the person can call Officer J. Jennings. The number is 805-594-8700.

If you or a loved one has been injured in an auto collision, the AA Accident Attorney strongly encourages you to call our San Luis Obispo car accident lawyers. Your experienced Car Accident Lawyer San Luis Obispo will provide you with the best legal representation and guidance that you need. Our offices are conveniently located throughout California and we conduct regular travels in the region to meet with clients. Contact Car Accident Lawyer today.