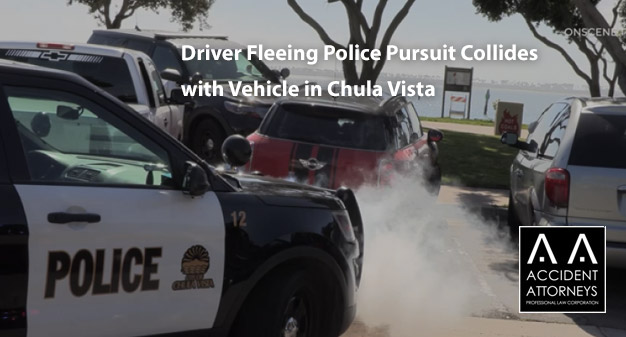 CHULA VISTA, CA (January 28, 2022) – A driver who was fleeing police pursuit collided with a vehicle in Chula Vista late in the morning on Thursday. The January 27 crash occurred where Third Avenue and J Street intersect.

Reports say officers attempted to pull the driver over at the J Street intersection for reckless driving, but the driver did not comply. The driver is alleged to have left at a fast speed, and ultimately the pursuit ended where the incident began at the same intersection.

The suspect driver is alleged to have slammed the car he was driving–described as a Ford Fiest–into a Chevrolet Trax. The Ford came to a stop after the crash, according to Gino Grippo who is a lieutenant.

Responders transported two patients who had been traveling in the SUV to the hospital. The types of injuries they suffered, and their current condition, are not known.

They were identified only as a mother and son. Their names and cities of residence have not been reported.

Authorities arrested the suspect driver. He was identified only as 35 years old. His name and city of residence have not been reported.

Investigators are continuing work on the incident.

If you or a loved one has been injured in an auto collision, Accident Lawyer strongly encourages you to call our Chula Vista car accident lawyers. Your experienced Car Accident Lawyer Chula Vista will provide you with the best legal representation and guidance that you need. Our offices are conveniently located throughout California and we conduct regular travels in the region to meet with clients. Contact Car Accident Lawyer today.