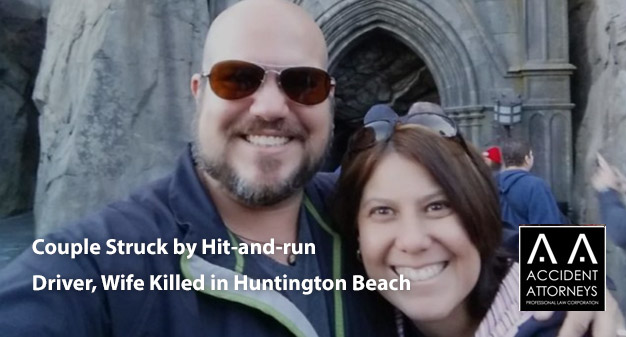 HUNTINGTON BEACH, CA (July 27, 2021) – Two people who were walking in Huntington Beach were struck by a hit-and-run driver on Sunday. The July 25 crash, which occurred at Newland Street and Pacific Coast Highway, killed a woman and injured her husband.

Authorities said the pedestrians had been going across Pacific Coast Highway in a marked crosswalk, and a vehicle–described as a Nissan Altima–went through a light that was red, and struck them.

The time was roughly a little after 8:00 p.m., Huntington Beach Police said.

Responders arrived and pronounced the woman deceased at the crash site. She was identified as Deanna Stuve, a resident of Hemet, 48 years old.

Responders transported the man to a hospital in the area. He suffered injuries that were described as serious. His condition is critical.

He was identified as Frederick Stuve, a resident of Hemet, 50 years old.

According to investigators, the driver fled the scene of the crash, and stopped not far from the crash site. The driver, and a passenger who had been traveling with her, left the Nissan, and entered a car that had been waiting. The car fled the area.

Investigators, using video from surveillance cameras and witness accounts, located the car in Huntington Beach at a residence. Authorities arrested a person at the home who is suspected of being the hit-and-run driver.

The suspect driver was identified as Chillandra Bell, a resident of Victorville, 26 years old. She was arrested on suspicion of hit-and-run resulting in death or injury, and vehicular manslaughter with gross negligence.

Investigators are searching for the driver of the waiting car that Bell entered when she is alleged to have left the crash site. They are also investigating other details of the crash.

If anyone has information about the incident, the person can contact Investigator D. Demetre. The number is 714-536-5670.

If you or a loved one has been injured in an auto collision, the AA Accident Attorneys strongly encourage you to call our Huntington Beach car accident lawyers. Your experienced Car Accident Lawyer Huntington Beach will provide you with the best legal representation and guidance that you need. Our offices are conveniently located throughout California and we conduct regular travels in the region to meet with clients. Contact Car Accident Lawyer today.