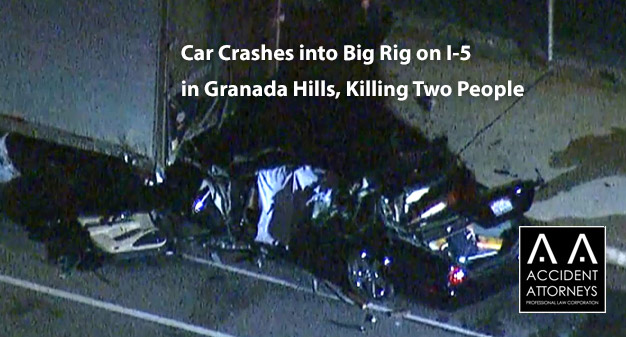 GRANADA HILLS, CA (August 20, 2021) – Early in the morning on Sunday in Granada Hills, a car smashed into the back end of big rig, killing two people. The August 15 crash occurred on I-5 on the southbound side of the freeway, not far from the 405 Freeway.

The time was roughly 12:57 a.m., according to Patrick Kimball. Kimball is an officer with the California Highway Patrol.

A vehicle–described as a Lexus sedan–had been traveling on the freeway at what may have been a fast speed, according to authorities. Reports say the car went off the freeway at a bend in the roadway.

The Lexus smashed into the rear end of a big rig that had been parked on the freeway’s shoulder. According to people who witnessed the crash, the Lexus erupted in flames.

Responders arrived on scene and found two occupants in the Lexus were decapitated. They were identified as a woman 22 years old, and a man 38 years old. Their names and cities of residence have not been reported.

The big rig’s driver was not hurt in the crash, according to reports. He was identified only as 35. years old. His name and city of residence has not been reported.

Investigators are continuing their work on the crash. If anyone has information about the incident, the person can contact the Newhall area office of the California Highway Patrol. The number is 661-600-1600.