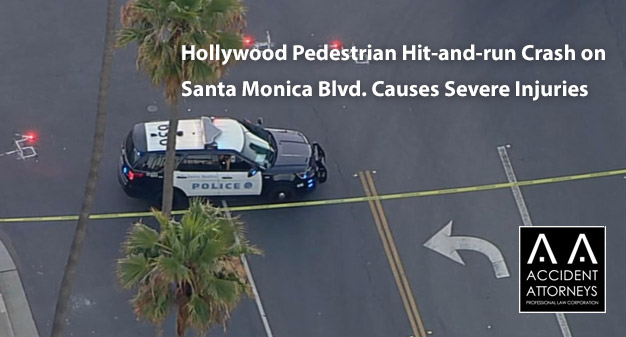 HOLLYWOOD, CA (October 11, 2021) – Early in the morning on Saturday in Hollywood, a pedestrian was struck and severely injured by a hit-and-run driver. The October 9 crash occurred on Santa Monica Boulevard near El Centro Avenue.

The pedestrian had been standing on Santa Monica Boulevard next to a vehicle that was parked when a vehicle–described as a Mercedes-Benz C Class, white in color with four doors–hit the victim. The driver did not stay at the crash site or offer help to the injured pedestrian, but fled the scene.

Responders arrived and transported the patient to a hospital. The types of injuries the person suffered, and current condition, are not known.

Investigators are working to find the vehicle involved in the hit-and-run crash, and the suspect driver. If anyone has information about the crash, the person can contact detectives at the West Traffic Division of the Los Angeles Police Department.

If you or a loved one has been injured in an auto collision, the AA Accident Attorney strongly encourages you to call our Hollywood car accident lawyers. Your experienced Car Accident Lawyer Hollywood will provide you with the best legal representation and guidance that you need. Our offices are conveniently located throughout California and we conduct regular travels in the region to meet with clients. Contact Car Accident Lawyer today.