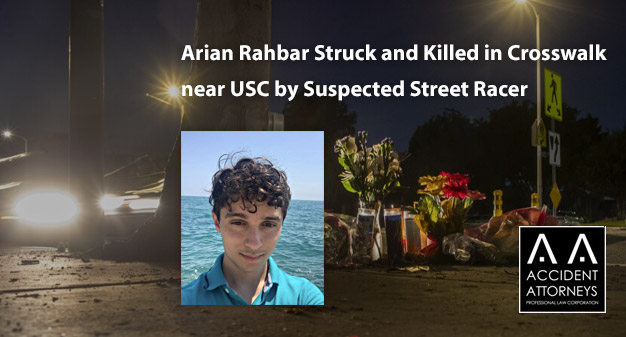 LOS ANGELES, CA (December 13, 2021) – Arian Rahbar was identified by the Los Angeles County coroner’s office as the pedestrian who was struck and killed near the USC campus on Saturday afternoon. The December 11 crash occurred on Jefferson Boulevard at the intersection with Harvard Boulevard.

According to police, Rahbar had been walking back to his home after going to pick up food. Two vehicles–which are alleged to have been driven by people who were street racing–traveled on Jefferson Boulevard at a fast speed.

A vehicle struck Rahbar; he died at the crash site.

Rahbar was a student at USC, 21 years old.

According to police, the two people who are alleged to have been racing are thought to belong to car club that has a reputation for racing incidents.

According to Ryann Moreno, who is a detective with the Los Angeles Police, one of the vehicles appeared to be a Challenger Hellcat, and the other an Infiniti, and both vehicles seemed to be outfitted to race.

Police said the two drivers stayed at the crash site and were taken into custody by authorities. Neither driver has been identified in reports.