4 Injured in Crash in Los Alamitos 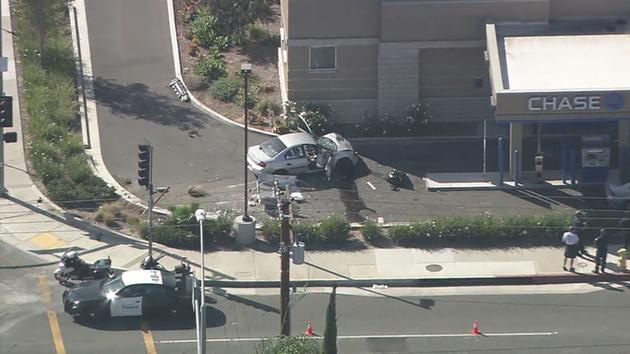 4 people were hospitalized in serious condition after a vehicle jumped the sidewalk and struck the 4 pedestrians who were crossing an intersection in Los Alamitos Wednesday afternoon, Oct. 11th. The incident was occurred just after 2:11 p.m. when The Orange County Fire Authority received reports of a pedestrian-vehicle crash near the intersection of near Ball Road and Bloomfield Street on the border of Cypress and Los Alamitos. Authorities responded and found 4 pedestrians in critical condition. According to witnesses, a Dodge sedan was traveling on Bloomfield Street when it started going northbound in the southbound lanes. The pedestrians were walking in the crosswalk when the collision happened. After striking the pedestrians, the Dodge crashed through the bank’s outer hedges, through a sign and came to a rest in the drive-thru lane just feet from the building.

The injured pedestrians and the driver of the Dodge, a 37-year old woman, were all transported to a local hospital. The pedestrians were listed in serious condition but medical staff say their injuries don’t appear to be life threatening. Los Alamitos police later said the pedestrians hit included 2 men, aged 18-years old and 19-years old, who are special-needs students at an instructional program at the Los Alamitos Unified School District and the other 2 people with them, a man and a woman, are instructional aides with the program. LAUSD officials told authorities that the group was walking to nearby grocery story to drop off recycled bottles.

“I was walking to my car and I heard a crash, horrible crash,” Cindi Maddex said. “I just saw things fly and I literally ran across the street, and there were two bodies — they weren’t moving.” Maddex said one of the victims appeared to be alive but was bleeding from the head. “The boy next to me — he was alive,” she said. “But he was groaning. He was making noise and I noticed blood was coming from his left temple.”

While the crash is still under investigation, officials said the use of drugs or alcohol is not suspected as a major factor in the collision. No other vehicles were involved in the crash. The intersection was going to stay closed as traffic investigators were on scene trying to figure out what led to the crash.