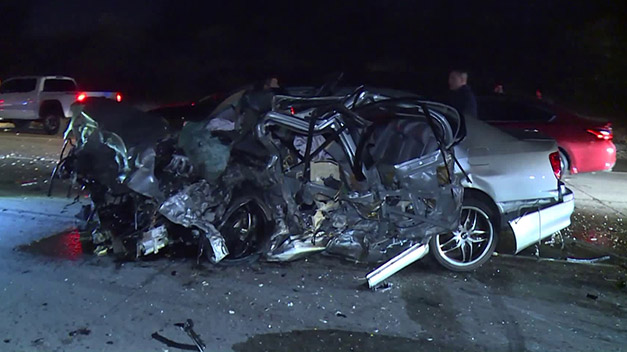 2 men were killed and 1 woman was hospitalized with severe injuries after a wrong-way driver collided head-on with another vehicle along the 118 Freeway in Porter Ranch in the Simi Valley early Saturday morning, Nov. 18th. The identity of the men was released by the Los Angeles County Coroner’s Office as 30-year old James Gubera of Los Angeles, the wrong-way driver, and 38-year old Christian Glenn of Simi Valley. California Highway Patrol dispatchers received multiple calls around 12:25 a.m. reporting a wrong-way driver traveling at a high rate of speed westbound in the carpool lanes on the eastbound 118 Freeway just west of the 405 Freeway in Chatsworth. Minutes later as CHP officers were responding to the wrong-way driver reports, dispatchers were notified of a collision on the 118 Freeway east of De Soto Avenue. According to CHP officials, Gubera had been driving his 2014 Toyota Camry in the wrong direction for unknown reasons, when it collided head-on with 2003 Lexus sedan driven by Glenn and his girlfriend, 25-year old Brooklyn Acker, of Simi Valley. Both were wearing seat belts. 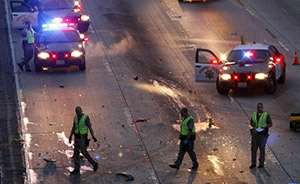 Los Angeles County Fire Department arrived on the scene and pronounced both Gubera and Glenn dead upon arrival. Acker was rushed by ambulance to Providence Holy Cross Medical Center in Mission Hills. According to her family, Acker suffered a torn aorta, bruised kidney, 4 broken ribs, a collapsed lung, damaged liver, cut intestine, cracked jaw and she had bit her tongue during the collision. She underwent a 5-hour surgery and was scheduled for another Monday morning. She is in a sedated coma, a family member said.

A man who was driving home at the time said he saw the smoke and stopped to help the victims. “I was driving home from my brother’s house and I saw a big cloud of smoke. I noticed it was an accident. I pulled over and saw the cars merging,” he said. “The first thing I saw was a car seat so I made sure there was no baby in the car. I jumped over the roof and ended up cutting my arm. I ended up opening the passenger door with another person who left, and the lady took what I assume to be her last breath. They have her in the ambulance right now and I’m not sure where they went from there.”

Authorities are looking into whether alcohol or drugs played a factor in the collision. The affected carpool lane was closed, as were the 3 other lanes of the eastbound 118 east of De Soto Avenue, according to the CHP. A SigAlert was issued through about 5:10 a.m. Authorities are urging anyone with additional information about this incident to contact Officer Rodriguez at the CHP’s West Valley office at 818-888-0980.

If you or a loved one has been injured in an auto collision, AA-Accident Attorneys P.L.C. strongly encourages you to call our car accident attorneys at (888) 607-1425 for a free consultation. Our highly skilled and experienced attorneys will provide you with the best legal representation and guidance that you need. Our offices are conveniently located throughout California and we conduct regular travels in the region to meet with clients. Reach out to us directly to speak with a car accident attorney whenever you need one.